Sadistic Couple Who Tortured Their Victims to Death

In an attractive farmhouse located on a 4-acre plot of land in Raymond, Pacific County Washington, horrors were unfolding behind closed doors. While the numerous animals which lived in the property were cared for with love and affection, Michelle and David Knotek did not extend the same compassion for their house guests. Three people were murdered inside their home, two of them systematically tortured for months until the abuse forced their weak and battered bodies to give up, stopping their hearts and ending their lives.

The Knoteks were eventually caught, brought under the scrutiny of local police after Michelle Knotek’s own daughter made statements against them. She testified to the horrific abuse and murderous actions she had witnessed her parents carry out.

While it appears David Knotek was a popular figure in the small community of Raymond working in construction, his wife was considered ‘temperamental’ and ‘volatile’. “It didn’t matter what Shelly would lie about. He’d stick up for her,” Michelle Knotek’s stepmother said regarding the nature of the couple’s relationship. “In my opinion, they both bought a one-way ticket to hell,” she said reports KariSable.com.

In the early months of 1991, Michelle Knotek was pregnant and offered 36-year-old local hairdresser Kathy Loreno lodgings in her home in exchange for helping to care for the children. Loreno had been living with her mother but accepted the Knoteks offer after disagreements over her boyfriend. According to court documents, initially, she was treated well by the couple. However, this changed dramatically as the months passed and Michelle and David Knotek began a campaign of consistent abuse.

Kathy Loreno was physically struck, poisoned, forced to live and work outside with no clothes on, starved, and repeatedly pushed to immerse herself in cold water or mud as forms of punishment. Michelle Knotek is believed to have dragged Kathy Loreno around the farmhouse by her hair, forced her to ingest medication and rotting food, and subjected her to ‘waterboard’ treatment. Throughout 1991, Loreno was subjected to this abuse daily and, as a result, she lost 100 pounds in weight. Near her death, her teeth and hair had fallen out and she was no longer able to walk or talk. She died in a frail, battered, and fragile condition while her two abusers looked on.

With instructions from Michelle Knotek, her husband and his nephew, 19-year-old Shane Watson, burned Kathy Loreno’s body and threw her ashes onto a beach nearby. Michelle then went to elaborate lengths to convince Loreno’s family and anyone else who asked questions of her lodger, that she had run away with a boyfriend. She wrote letters supposedly from Loreno to her family and dictated to her children the story they were to tell if anyone questioned them.

“Near the end of her life, Loreno could not walk or talk, one side of her face drooped, her vision had declined significantly, and she was covered in vomit.”

Kathy Loreno was officially reported missing by her family in 1994. They had begun to have suspicions about Michelle Knotek and the story she was telling on where Loreno had gone, but no leads could be found on her whereabouts and her case went cold.

Ten years after the couple had slowly murdered their lodger through a catalog of intense abuse, they repeated their behavior with a new victim. Court documents state that in October 2001, Michelle Knotek invited 57-year-old Ron Woodworth into her family home under the same guise of helping out in the house.

Her children, now in their early 20s, were much more aware of the goings-on in the house and witnessed their parents inflict the same pattern of torture on Ron Woodworth as they had a decade earlier with Kathy Loreno. He too declined physically and mentally until he was unable to carry out even basic human functions. It is believed Ron Woodworth died between 2001 and 2003. After his death was buried in the backyard by David Knotek.

To inflict such pain and suffering on another human being day after day for such a long period of time reaches deep into the depths of depravity. The obvious agony Kathy Loreno and Ron Woodworth were in, especially in the last months of their lives, clearly did nothing to prompt the Knoteks' empathy or any real emotion in them at all. By all accounts, they were indifferent to the suffering at their own hands and had a determination to continue inflicting pain. 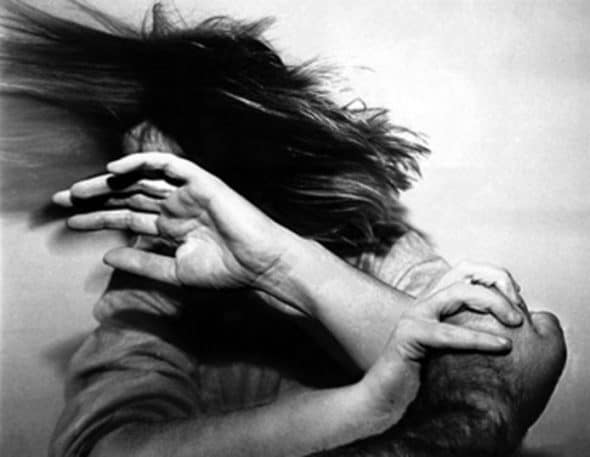 It appears the leader, unlike most couples who kill together, was Michelle Knotek, rather than her husband. In this case, it was the female in the relationship who was in control, directing their actions, and the male who was obeying her commands. Although he may not have been the one making the decisions, this does not mean that David Knotek was any less culpable for these appalling crimes than his wife.

The discovery of the abuse and murders of Kathy Loreno and Ron Woodworth was made after one of the Knotek's' daughters went to the police in August 2003. With Michelle Knotek’s second daughter also providing a statement confirming the abuse and murder of Ron Woodworth, both Michelle Knotek and David Knotek were arrested and a full investigation was launched. When police began to dig in the backyard of the Knoteks' farmhouse they discovered the remains of Ron Woodworth.

Michelle Knotek, under questioning, remained steadfast in her stories of her lodgers simply moving on and leaving the area. Her husband, by contrast, confessed to not only the murders of Loreno and Woodworth but also to the murder of his own nephew, Shane Watson.

The Seattle P-I reported that David Knotek told police he had shot his nephew two days after his wife had beat Watson when she found a photograph he had taken of Kathy Loreno’s injuries. Concerned his nephew may go to the police with his evidence, police believe Knotek killed Shane Watson in order to ensure his silence. His body, like that of Kathy Loreno, was burned and his ashes thrown across a local beach. The remains of Kathy Loreno and Shane Watson have never been found. 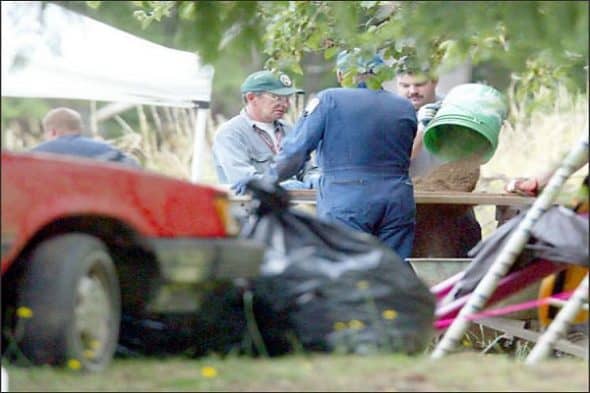 Searches in the backyard of the Knoteks' home.

In 2004, 49-year-old Michelle Knotek was charged with two counts of second-degree murder in relation to the deaths of Kathy Loreno in 1991 and of Ron Woodworth between 2001-2003. Her husband, 51-year-old David Knotek, was charged with second-degree murder for the death of Shane Watson, and in assisting his wife in her criminal offenses along with unlawful disposal of human remains.

During the investigation into the murders, a further death became under suspicion. 81-year-old James McClintock was a military veteran and survivor of Pearl Harbor. He lived alone in Raymond and in 2001, the same year it is believed Ron Woodworth was being abused inside their home, Michelle Knotek began working as McClintock’s carer. In February 2001, James McClintock died from a head injury which Knotek told police had occurred due to a fall from his motorized scooter, which he used to get about and had fallen from numerous times in the past. His death was ruled as undetermined and suspicious but little evidence could be found to prove any foul play.

James McClintock had written a will during the time Knotek was caring for him. In it, he stated she would be left money after his death to take care of his beloved Labrador, Sissy. In the event of the dog’s death, the house and a small sum of money would be left to Michelle Knotek. After his death, Knotek informed the will trustee that Sissy had died and, in accordance with the will, McClintock’s assets including his home were passed onto Michelle Knotek.

According to the Seattle P-I, it was later discovered that Sissy the dog was alive and well and being cared for alongside the Knoteks' other animals that had been removed from the farmhouse and taken to a local pet shelter. 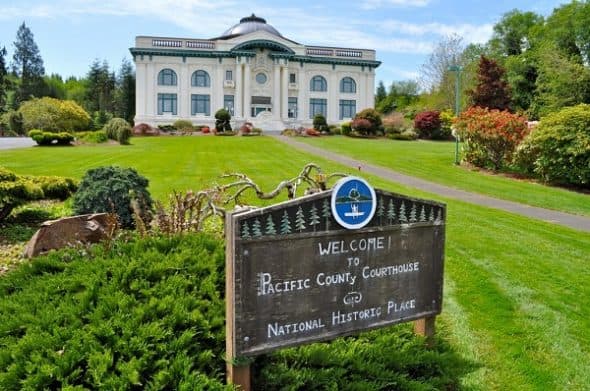 On 18 June 2004, Michelle Knotek replaced her initial not guilty plea with an Alford plea at the Pacific County Superior Court. The deal offered to her was in effect a guilty plea to one count of second-degree murder and one count of first-degree manslaughter. The Alford plea allowed her to keep her innocence, however, it acknowledged should she be tried in a criminal court the evidence against her would most likely result in a full conviction.

The Alford plea also allows for charges to be downgraded, ensuring a shorter prison sentence than she would likely receive should she go to trial and face a jury. The court determined that the evidence collected against Michelle Knotek was enough to find her guilty beyond a reasonable doubt on both charges and her Alford plea was accepted. Two months later she was sentenced to a total of 22 years in prison -- 13 and a half years for the murder of Kathy Loreno, and eight and a half years for the manslaughter of Ron Woodworth.

David Knotek pleaded guilty to the second-degree murder of his nephew Shane Watson and entered an Alford plea for the charges of aiding his wife and disposing of the three victims' remains. He was sentenced to 15 years in prison on 26 August 2004, just weeks after his wife was jailed.

The agonizing deaths suffered by Kathy Loreno and Ron Woodworth are unimaginable and it is difficult to fathom what kind of pleasure any human being could receive from inflicting that kind of suffering. Both Michelle and David Knotek received lenient sentences for the crimes they committed. The availability of the Alford pleas and the very relevant timing of a United States Supreme Court decision just before their sentencing in August 2004 (Blakely v. Washington), which ‘eliminated the possibility of the more severe exceptional sentence’, meant less time in prison. At least for now, this couple remains behind bars where they need to be, although given just 15 years in 2004, David Knotek will soon be eligible for parole.