The Abuse and Murder of 2-Year-Old Liam Fee

In a case that has been called one of the worst examples of child neglect and abuse by parents in Scotland, the murder of 2-year-old Liam Fee in March 2014 in the town of Glenrothes in Fife, is as harrowing as it is shocking.

Liam Fee was a 2-year-old little boy living with his mother, 31-year-old Rachel Fee, and her civil partner, 29-year-old Nyomi Fee. The pair had moved to Fife from Newcastle-upon-Tyne after Rachel Fee separated from Liam’s father and took her partner’s name. In May 2016, after a traumatic trial at the High Court in Livingston which excused jury members from being called for jury service again for the next 10 years, both women were found guilty of murdering Liam at their home on 22 March 2014. 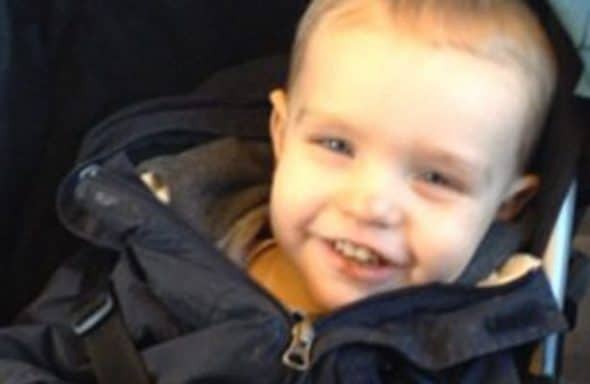 Two other young children were in the care of the couple and they were also found guilty of systematic abuse against these children over the course of two years. The BBC reported at the time of their trial the shocking abuse inflicted on Liam Fee in the period before he died. The 2-year-old had “double fractures of his thigh bone and arm” and had over 30 injuries to his small body at the time of his death. His body gave up when a blow to his abdomen and chest ruptured his heart.

After Liam Fee was killed, both Rachel and Nyomi Fee tried to blame his death on one of the other young children in the house. The two children in the home, through interviews with specially trained police officers, were eventually able to tell of the abuse they had suffered by the couple, which included being beaten, tied up, and locked in a makeshift cage. 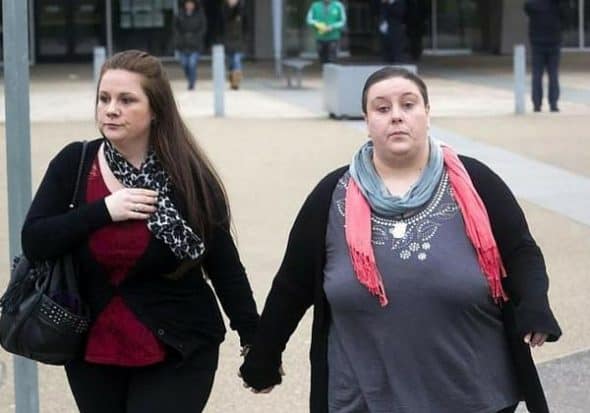 The National Children’s Alliance has some frightening statistics regarding the prevalence and extent of child abuse. They state that almost 700,000 children in the United States are abused every year and around four out of five abusers are the child’s own parents. The American SPCC provides a breakdown of these statistics, highlighting 80% of child fatalities involve at least one parent and 75% of the child abuse victims were under the age of 3-years-old.

In the UK, the NSPCC reports in 2016 over 58,000 children were identified as needing protection from abuse. A research study published in 2015 by researchers from the University of Central Lancashire in the Journal of Investigating Child Deaths, examined 100 cases of intra-familial deaths in England and Wales from 2006 to 2012. They found male parents were most often the perpetrators of neglect and physical abuse on a child, with substance abuse commonly being an influencing factor.

Of the 100 cases, children aged between 13 months and 2 years, like Liam Fee, made up 21% of victims, with head injuries being the largest cause of death. Multiple injuries, stab wounds, asphyxiation, and strangulation also featured as the most common form of abuse and cause of death in child victims of abuse within the walls of their own homes.

In the case of Liam Fee, concerns had been raised on at least two occasions by the child’s childminder and nursery that they child may have been subjected to abuse. Visits to the Fees' home resulted in no action being taken when the two women convinced authorities that Liam Fee was ‘self-harming’.

In an independent Significant Case Review undertaken after Liam Fee’s death, a series of ‘missed opportunities’ were found with child pediatrician Dr Jacqueline Mok who led the review, noting that both Rachel and Nyomi Fee were "manipulative, devious and hindered services" by constantly rearranging appointments, being prepared when they knew authorities were coming to visit, and manipulating social workers by playing them against each other in order to cover up the true abuse that was taking place in their home. 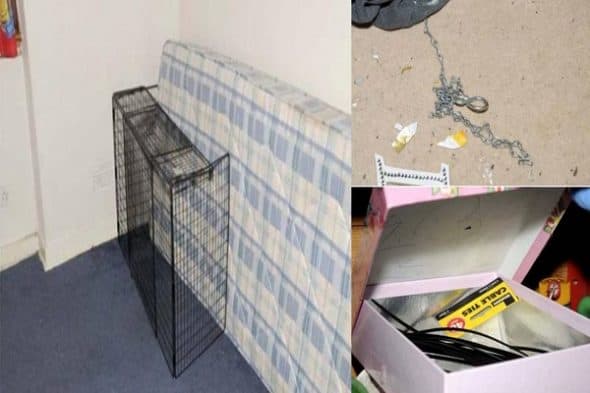 Inside the Fee house, a fireguard used for a cage, chains, and cable ties.

The 2005 research highlighted that 40% of the 100 child abuse victims studied were known to social services before their death. Furthermore, parents made up 71% of the suspects in abuse of their child, with the mother’s partner being involved in 13% of cases.

Taking the Fees at their word and not digging deeper into the reports provided along with confusion of who was in charge of the case with a lack of inter-agency working, were also noted as contributing to how the abuse of Liam Fee was not detected before his death.

"The records showed little evidence of professional curiosity. The mother and her partner's allegations of (Liam's) self-harming behaviour were accepted by professionals from all services despite statements to the contrary from staff who saw or worked with him."

Dr. Mok referred to “disguised compliance” by the Fees where they would appear cooperative and welcoming to suggestions of support and offers of help, however, none of these offers were acted upon by the couple. They simply told social workers what they wanted to hear.

The report concluded with up to 20 recommendations for how child protection services within Fife could be improved with the problems identified in the Liam Fee case directly addressed. A Scottish Government spokesman has said of the case and review, “Liam’s death highlights how important is it that professionals who have concerns about a child’s wellbeing share information to ensure that we get it right for every child.”

YEARS OF ABUSE: THE MISSED OPPORTUNITIES TO SAVE LITTLE LIAM 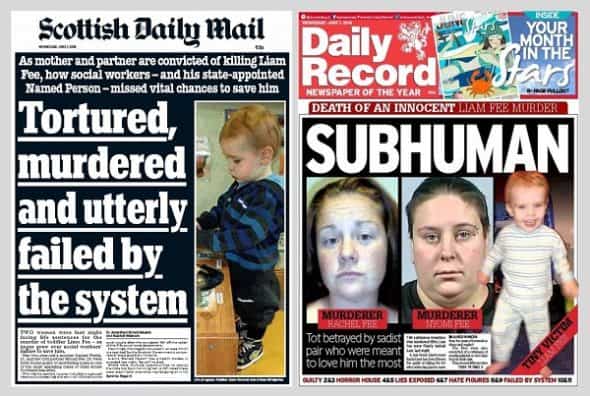 Liam Fee was an innocent child who had no way to protect himself from his mother and her partner who was supposed to provide love and care not beatings, abuse and pain. The survival of the other two young children in their care is a positive outcome in this horrific case, however, these two children will now grow up with the physical and psychological lasting damage from their time with Rachel and Nyomi Fee.

In July 2016, both women were given life sentences for the murder of Liam Fee, with both to spend a minimum of 24 years in jail before they can be considered for parole. In 2017, Rachel Fee’s appeal against her conviction was rejected by the Court of Criminal Appeal in Edinburgh. Her appeal was based on blaming her partner Nyomi Fee as being the ‘main actor’ within the murder and Rachel Fee, therefore, less culpable. In response, Lord Turnbull wrote in his written opinion that there was “no basis upon which it could be said that the appellant did anything less than actively associate herself with a common criminal purpose which included the taking of human life.” Both Rachel Fee and Nyomi Fee remain behind bars.